I have been trying to do this:

but I cannot get the dependencies scanner to work correctly
What I want is, if any headers declared (including “recursive header”, ie. header included by an header) in timer_x.c changes, the custom command should run

But it does not work!

Based on the file extension (.c), I guess you want to compile C code. If so, you should not use add_custom_command to do that at all. 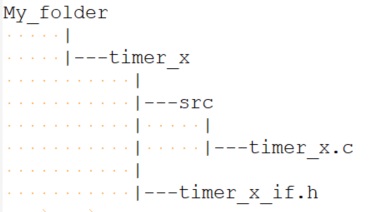 You shouldn’t need add_custom_command to do that.

This is what I would write:

Nothing more. CMake and make should take care of dependency tracking.

That’s what I did, ${SOURCE} includes all the *.c file already:

Nothing more. CMake and make should take care of dependency tracking.

It will track changes in *.c file, but not *.h file. Which means if any of the *.c file is modified, incremental compilation will happen to that *.c file only

But it just does not track changes to *.h file. If any of the *.h changes, “make all” does not re-build

I learnt somewhere (and verified it myself) that even if I add *.h in add_executable(…), the build target is not sensitive to changes in *.h file

Of course I can do a “make clean” before build, but that defeat the purpose of being able to compile incrementally with the use of makefile

Or did I miss or get something wrong entirely?

Or did I miss or get something wrong entirely?

I don’t think you necessarily missed something, but there’s definitely something wrong with your setup, because normally, the way CMake handles inclusion dependencies works. There must be something strange in your CMakeList, in the source files, or in your toolchain. Can you provide a self-contained example which reproduces the incorrect behaviour you observe, so that we could analyse what’s wrong?

The things to include in the example would be:

Ideally, minimise the example by removing anything which can be removed without the bug disappearing.

The problem you’re experiencing sounds strange; I’d love to get to the bottom of it if my skills allow.

Out of curiosity, are you cross compiling?

I found that my tool (Tensilica Clang) wasn’t for some reason being recognized by CMake as Clang, so it wasn’t generating dependencies correctly.

When you do a reconfig and it tests for the C/C++ compilers, does it say “compiler unknown” or does it give a version and manufacturer of the compiler?

Out of curiosity, are you cross compiling?

When you do a reconfig and it tests for the C/C++ compilers, does it say “compiler unknown” or does it give a version and manufacturer of the compiler?

It was able to find the compiler:
– CMAKE_C_COMPILER=C:/xxx/xxx/xxx/bin/xxx.exe

In some cases when using the CMake Makefile generator will not pickup up all the dependencies one would expect.

Like others have pointed out that adding timer_x/src/timer_x.c with add_executable should have sufficed. You could try switching to the Ninja generator and see if that gives you better results (as it handles dependency tracking differently).

I mean, what does the Cmake show when it runs the test compilation to identify the C compiler?

If CMake can’t identify your compiler, it doesn’t know how to get the implicit dependencies, so it doesn’t.

Also, see https://github.com/microsoft/vscode-cmake-tools/issues/1188 where it suggests you need to set both CMAKE_C_COMPILER and CMAKE_CXX_COMPILER, but also see https://stackoverflow.com/a/45934279/550235 where it recommends not using SET() to tell cmake where your compiler is.

How to generate these message? Can you show me?
I can only manage to print the macros like CMAKE_C_COMPILER, etc

Run CMake in an empty binary directory, and it should output its compiler detection information.

Ok, you are cross compiling, then. (Compiling in windows for the Renesas part). Cross compiling with CMake is not the most documented of features, unfortunately.

I’m assuming Renesas tools are GCC based. I don’t know exactly how to help you since I haven’t ever compiled for Renesas, but make sure you have CMAKE_C_COMPILER, CMAKE_CXX_COMPILER and CMAKE_ASM_COMPILER defined in your toolchain file.

Some of this probably isn’t useful to you, but it’s a template that is working for me when we’re cross compiling using the IAR tools for ARM.