Control what is installed / packaged

I’ve writtem some install logic and cpack logic for my application. It generally works, but it literally installs everything.

I use FetchContent whenever possible so all my dependencies are subdirectories. If I install my application everything from these dependencies will get installed as well including documentation, header files, cmake scripts and other stuff.

How can I just install my application and everything that is necessary for it from the dependencies. But exclude all not needed things like header files or documentation?

The subprojects would need to offer options for you to disable their install rules or, if it works, you can use install components to install just what you need. I don’t think CMake has a way to say “ignore install rules for this directory”, but maybe some custom install code that calls return () before all of the subdirectories run could work?

Hmm my own install target has a component, so I could just install that target. But then shared libraries are missing for instance.

I though maybe using “RUNTIME_DEPENDENCIES” would help with this, but for some reasons it doesn’t.

Shouldn’t this be able to find my shared dependencies? Or at least try to find them. It searches for Qt6 and also installs that sucessfully, but it doesn’t search for all linked libraries, which came via FetchContent. At least they are not installed neither is there an error message.

Directory based Ignoring, no matter if build in or manual, would probably not helper either. The libraries often have all their install stuff in one directory. And they also don’t use Components.

Actually I had a look again at runtime dependencies and the issue seems to be the RUNTIME_DEPENDENCIES of install. The manual approach works:

Here is a small test with a comparison: 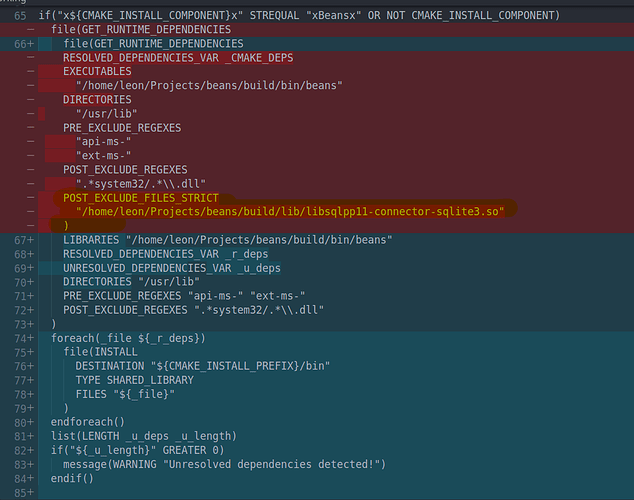 As can be seen the install commands puts the third party library I tested here in a “POST_EXCLUDE_FILES_STRICT”. Is this intentional?

I would guess that it is skipping recursive scanning to avoid double installation. You could add your own install rules for targets in the subdirectories so that you can bypass whatever other rules are there.