Within your cmake scripts, the variable CMAKE_BINARY_DIR holds the top level binary directory for the current run.

Adding subdirectories like this is not advisable, though – you’re looking for something outside of your source tree, and assuming (hard coding) where it is. This will very likely break on other machines, such as CI, or users trying to build your project. 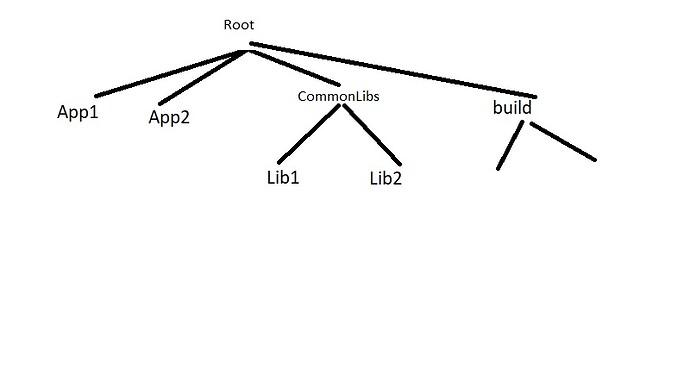 Being able to use relative paths in add_subdirectory seems like something that would be needed often. The attached image shows the code structure in our company. There are a bunch of common libraries such as Lib1, Lib2 etc. We need to develop multiple applications such as App1, App2 etc. using those common libraries.
Now, cMakeLists.txt for App1 would live in the App1 folder; right? For it to refer to Lib1 library, it will have to use the relative path add_subdirectory(${CMAKE_SOURCE_DIR}/…/CommonLibs/Lib1 …).
We would like all build artifacts (the obj files, libs and executables created) to get created out of the source directories, i.e., under root/build. How can we accomplish this using cMakePresets?

With a folder structure like this, the subprojects (App1, App2) need to accept one of two scenarios:

I would recommend using solution #2 above. The CommonLibs project should define install() rules and export CMake package files, this makes it simple to install CommonLibs on a computer, and then you can build App1 or App2 on their own from anywhere else on the computer.

Thanks! Let me explore solution #2 you suggested.
By chance, does anybody have a link to a public repo (e.g., on Github) which is a good example for following solution #2?

Here’s a set of two repos that use this pattern:

Oranges is a library of CMake modules and scripts. It uses CMake install rules and exports CMake package files: 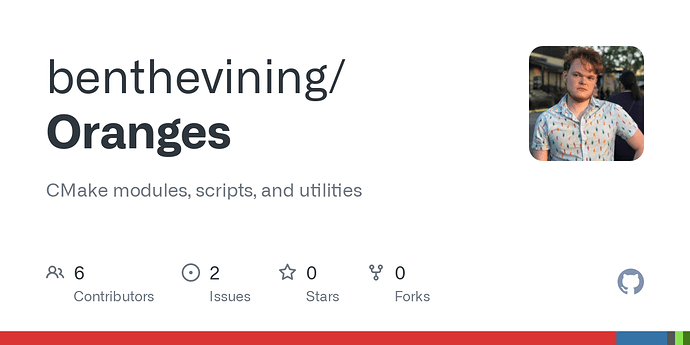 CMake modules, scripts, and utilities. Contribute to benthevining/Oranges development by creating an account on GitHub.

And Limes is a C++ library that depends on Oranges’ CMake scripts for its build configuration: 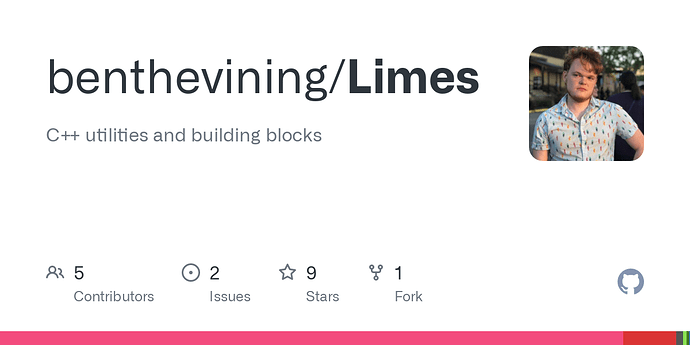 C++ utilities and building blocks. Contribute to benthevining/Limes development by creating an account on GitHub.

In its main CMakeLists.txt, you can see I’m doing: find_package (Oranges 2.24.0 REQUIRED). The Oranges repository itself doesn’t even have to be present on the Limes dev machine, the user could’ve just unpacked a tarball.

Thanks for the link! Just wondering… Is the approach of solution #2 above more suited for the case where the libraries under CommonLibs are more mature whose source code doesn’t change often?
In our usage, the code for at least some of the libraries under CommonLibs need to be changed as we work on the apps (App1, App2,…). In the old Visual Studio project days prior to using CMake, in our solution, all the libs and an app would be under a single solution where changing the code for a library would automatically trigger the App to be rebuilt. Such a behavior would be ideally what I would hope for.

My actual workflow is slightly more complex than exactly what I said, but the basic outline is the same.

Just like you said, for the actual development process, if I’m developing a ProjectA that depends on ProjectB:

So, when CMake’s find_package command runs, it looks for both:

CMake itself has variables that control which kind of files it tries to look for first when searching for packages, see CMAKE_FIND_PACKAGE_PREFER_CONFIG.

If ProjectB already exports CMake package files, then PackageA finding and loading an installed version of PackageB will already work out of the box.

To support the cases where an installed copy of ProjectB cannot be found, we can provide a CMake script called FindPackageB in ProjectA's source tree. In my projects, you’ll notice in Limes’s cmake/ directory there is a FindOranges.cmake. Oranges’s source tree actually includes this file, so any project that uses Oranges can copy it verbatim into their source tree and commit it.

What this find module does is pretty simple:

An example of such a script is here: Limes/FindOranges.cmake at main · benthevining/Limes · GitHub

I also wrote a Python script that will generate one for you: Oranges/generate_find_module.py at main · benthevining/Oranges · GitHub

So now, in my development situation, if I am locally working on both Oranges and Limes, I can put the environment variable: export ORANGES_PATH=<path> in a dotfile somewhere, and then I can build Limes from its directory without changing its source code at all. You can also tell the path at configure time, so I could configure Limes with: cmake -B Builds -D ORANGES_PATH=<>. Or, if I do neither of those, I can also run cmake --install from the Oranges directory, and then configure Limes and it will find the installed Oranges package.