Hi all,
I’ve been trying for days in any possible way, but after the install of the new Intel oneApi HPC I’m not able to compile any Fortran (mixed C/Fortran) code from CMake.

I’m launching CMake by command prompt after having called the bat scripts from Intel (setvars) and from VS (vcvars) to have PATH in a proper state. IFort is found,

What happens is that I get “No CMAKE_Fortran_COMPILER could be found” and the CMakeError.log tells that CompilerIdFortran failed because of
LINK : fatal error LNK1104: cannot open file 'ifconsol.lib'

I tried also to put the folder containing the proper ifconsol.lib directory in PATH and also in LIBPATH and in LIB (yes, I know I’m in Windows, but I tried) but I always hit the same issue.

Thanks in advance for any help.

It sounds like something is doing (a Fortran equivalent of) #pragma comment to do “autolinking”. This still needs the library directory added, but I’m not familiar.

After days of struggling I understood what was going on…
Cmake tries to compile the CMakeFortranCompilerId that is inside <CMAKE_BINARY_DIR>\CMakeFiles\<CMakeVersion>\CompilerIdFortran, but what I didn’t know is that is not trying to compile it through a simple command line compilation, but through Visual Studio.

In fact I was perfectly able to compile the CMakeFortranCompilerId.f manually from command line, but I wasn’t when I opened the CompilerIdFortran.vfproj Visual Studio project.

To solve the issue you need to go inside Visual Studio>Tools>Options>Intel Compiler and Libraries>IFORT Intel Fortran Classic>Compilers>x64 and in the forms Executables, Includes, Libraries look for any instance of $(IFortInstallDir) and replace it with $(IFORT_COMPILER19).

On the contrary, if you use the new IFX instead of the standard IFORT, it seems that the paths are set correctly.

I don’t know if the $(IFortInstallDir) macro can be changed directly (I didn’t find any hint online)
I will invite Intel to double check their Visual Studio integration. 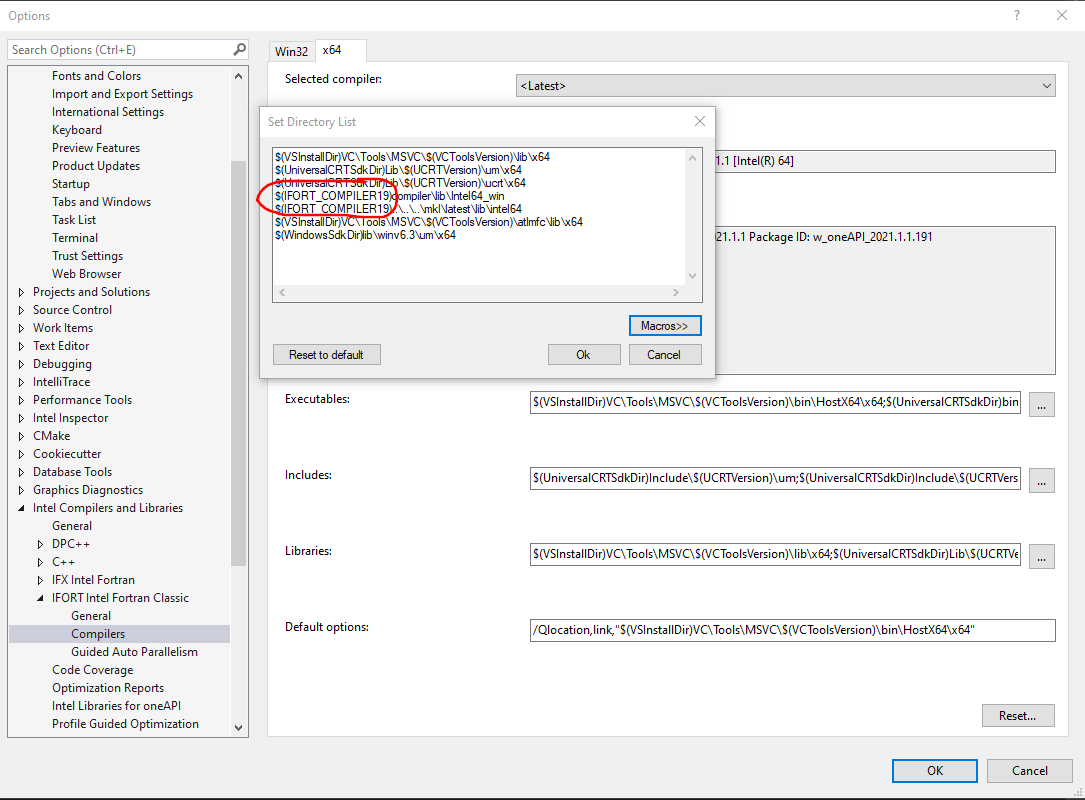 And BTW, the reporter says:

I frequently link statically build libraries together, as linking dynamic libraries between C and Fortran is more complicated on Windows with Intel compilers

And actually I didn’t solve my problem yet. With CMake it’s now working properly but I’m encountering a lot of errors in the compilation (warnings of bad preprocessor directives, errors in finding symbols, ifx that was not found because actually the default path points to the ifort directory instead).

Anyway, CMake is now able to compile at least basic test files so I think it’s now totally on Intel+VS.

Please file an issue to track this (even if it’s not our problem, it’d be nice to have a single point for anyone else encountering the problem to add information in case we can do something eventually).

Do you mean an issue on Kitware/CMake GitHub or are you talking about Intel forum?

I just realized that a similar thread was already there. I don’t know why I didn’t find it before… and I was exactly looking at GitLab…

I added a comment to this thread since it matches the problem that I had.