This is the command that causes that:

Anyone have any idea why this happens, and how to actually solve it?

I guess add_custom_command expects so called “cmake-style paths”. You can use file(TO_CMAKE_PATH) to convert a native Windows path into a cmake-style path (see https://cmake.org/cmake/help/latest/command/file.html#path-conversion for more details).

It is also advised to always double-quote paths, since some function might interpret a single path containing spaces as several space-separated arguments.

I hope this helps!

Neither cmake-style paths or native paths work unfortunately, it was one of the first things I tried. Even manually giving it “…/Tools” (autoformatting turns it into …, but its two .) still added a nonsense C: to it.

cd C:\Tools changes the working directory of the C: drive to C:\Tools. But if the current drive is X: then an addition C: has to be done to switch the drive.

Is it really adding C: //? Because that would be a problem.
Otherwise why would having C: be a problem at all?

See actual generated commands in the OP. It adds a 2nd command with just C: and nothing else.

As @fdk17 mentioned, having C: in a batch script is totally valid and necessary in case the current working directory is on another drive.

I made a similar example, though manually in cmd.exe, and from C: to D:

I hope this helps!

Hi McMartin, you can achieve the same with “cd /D”. The second D: there actually returns a failure, so the script aborts at that moment. Which is my current problem.

Did some additional testing now. The commands start working when the drive is not a network mounted drive, or an NTFS mounted directory. I suppose that is an acceptable limitation, though ‘cd /D’ doesn’t seem have this limitation. Will just move the project and necessary files to local directories instead.

you can achieve the same with “cd /D” 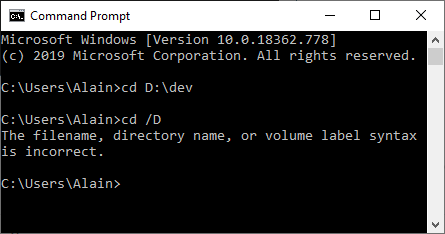 /D is an option that must be passed to the directory-changing cd command, and means “also change the drive if applicable.” So the correct syntax would be