Supposing you’re able to use the newest, shiniest version of CMake, what are the current drawbacks for globbing sources with CONFIGURE_DEPENDS?

Note: We do not recommend using GLOB to collect a list of source files from your source tree. If no CMakeLists.txt file changes when a source is added or removed then the generated build system cannot know when to ask CMake to regenerate. The CONFIGURE_DEPENDS flag may not work reliably on all generators, or if a new generator is added in the future that cannot support it, projects using it will be stuck. Even if CONFIGURE_DEPENDS works reliably, there is still a cost to perform the check on every rebuild.

Emphasis mine. With which existing generators can CONFIGURE_DEPENDS be expected to work reliably? To work at all? Exactly how costly are those globbing checks that have to be performed on every rebuild?

enumerating and keeping up to date the list of sources
Why was globbing added to CMake?
CMake commands cause project build to walk entire drive.
ben.boeckel (Ben Boeckel) March 17, 2020, 1:10pm #2

The check costs depend on the platform (and probably generator too). I don’t know of the performance costs, but that’s because I personally find that even if it were performant, there’s at least one issue that I run into often enough to make it not worth it.

I still highly discourage globbing for the reason that files may appear in your source tree that you do not intend to build. The main case I’ve run into is that during conflict resolution in git, the other versions of the file(s) in conflict are named ${base}_${origin}_${pid}.${ext}, so if you try to build in the middle of a conflict, you’re going to glob up these files.

Another reason is that now the addition/removal of a file is not present in your build system diff, so tracking down “what did you change?” in debugging reported problems can be harder since there’s no evidence of accidentally added/removed files in a normal ${vcs} diff output.

Here is an example of using GLOB with configure depends. 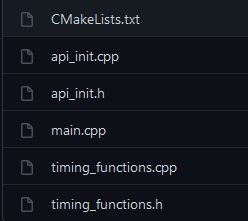 Perhaps this is less of an issue on Linux platforms (In general CMake is a lot faster on linux). But I’m mainly a windows dev.

Have you measured this? I tried recently and found performance was awful under WSL but not too bad on Ninja on a fast NVMe drive.

on a fast NVMe drive

True, but SSDs generally (incl. SATA) are pretty ubiquitous these days. I’m very curious if there are any actual performance numbers on this.

Running this same experiment from WSL on the NTFS part of the same drive crashes performance to 2.373s, but this is probably just WSL’s poor filesystem performance generally.

Running this same experiment from Windows on the exact same NTFS drive gives 0.119s, so NTFS is a good bit slower than ext4.

I actually wanted to ask you about this:

The main case I’ve run into is that during conflict resolution in git, the other versions of the file(s) in conflict are named ${base}_${origin}_${pid}.${ext}, so if you try to build in the middle of a conflict, you’re going to glob up these files.

What merge tool are you using, or what configuration option do you have set to get this behavior? When I do merges in git, the conflicting files are over-written in-place with merge markers, I don’t get those files you’re describing.

I use git mergetool with the merge.conflictstyle=diff3. Even without that, files getting added to the build and such just by their presence isn’t desired; I want to see the addition of a file in the CMake code so that if someone forgets to push, the error is obvious (instead of, potentially, being a link error).

Every file in src/ gets added. And you use preprocessor definitions for OS specific code.

That doesn’t help all that much; I’d also like to not install those headers (or classes that are disabled due to other options) on platforms that don’t actually have implementations behind them.

I didn’t think about the installation aspect. That’s a good point.

Another relatively common pattern that fails with globbing is where some source files only get added for some compilers or platforms. This pattern is useful because it avoids peppering sources with #ifdef's and leaves you with very readable source files.

The WSL ext4 disk I tested on was virtualized and the performance was fine. Not as good as native, I’m assuming, but not unacceptable like the FUSE/9p access to the host NTFS file system through WSL. If you’re building over 9p, I think you have bigger fish to fry.

I tried measuring glob performance in this same scenario on GitHub Actions (all virtualized) using both the Visual Studio (windows) and Ninja generators and the no-op build overhead incurred by globing was under a half second in all three scenarios.

It does seem like there are other good reasons not to glob, but I haven’t been able to reproduce the supposed performance overhead except under very silly scenarios.

Here’s an idea I had while thinking about this:

When the file list does change, CMake currently has to re-configure from scratch, whether you’re globbing or not. There is a way, I think, to get better performance than either existing approach by adding a generator expression for globs such that the result of the glob cannot be inspected during the build:

At generation time, it is known which targets have a glob expression in their (INTERFACE_)SOURCES property and to which other targets they’re linked (or referenced by $<TARGET_OBJECTS>). So there’s enough information to incrementally update the rules that depend on the result of that glob. I guess there’s an open question here about how source file properties should apply to files matched by $<GLOB:...>, but maybe it’s okay to prohibit that because source file properties aren’t very common in user code (and you can always split up your files or refine your globs and use the target properties).

Because the result of $<GLOB:...> cannot be inspected at configure time, there’s no need to rerun the whole CMakeLists.txt when the result changes, only the generation step. That could actually save a significant amount of time. If the glob itself changes, then of course you have to re-configure.

On the other hand, this would encourage people to use globs, which I understand you don’t want

there’s no need to rerun the whole CMakeLists.txt when the result changes, only the generation step

In order to get to the generator step, the configure step must have been run. There’s not enough on-disk state to “start up” post-configure and just do a generate.

There’s not enough on-disk state to “start up” post-configure and just do a generate.

I don’t see why that wouldn’t be possible in theory.

@alex I ran some experiments and you were correct. The performance overhead was pretty minimal.

I’ve been using WSL recently to build recently. And as you mentioned WSL has performance issues. It led me to find out that if you use the /mnt drives in WSL your file system operations become much slower. Which was the true cause of my problem.

# A brief description As a Symfony developer, it's always been hard to get a st…able/fast development environment. My current setup is a Ubuntu running under VirtualBox (using vagrant). While page generation is fast, my IDE accesses my PHP files through SMB, which is really (sometimes horribly) slow. I'm now trying to use WSL to improve all of this. However, I'm having a major performance issue when using `/mnt/*` folders. If I set up a Symfony project under `/mnt/c`, it is really slow. If I set it up under `/home/mikael`, it is very fast. # Expected results Drives mounted under /mnt should be as fast a any other folder. # Actual results With a new Symfony 3.1.3 project, under `/home/mikael` takes between 100ms and 130ms to generate the home page. The same project under `/mnt/c/` takes between 1200ms and 1500ms. # Your Windows build number 10.0.14393.51 # Steps / commands required to reproduce the error ``` # Install PHP5 $ sudo apt-get install -y php5 php5-json # Download Symfony installer $ sudo curl -LsS https://symfony.com/installer -o /usr/local/bin/symfony $ sudo chmod a+x /usr/local/bin/symfony # Download Symfony cd symfony new symfony_test # Start Symfony cd symfony_test php bin/console server:run ``` Open your browser and go to http://127.0.0.1:8000/. Once the page is loaded, refresh it (on first request, Symfony had to generate its cache). Generation time is displayed on the bottom left ![Image](http://glados.aperture.fr.nf/up/load/2016/08/2016-08-12_01-18-38.png) You can then do the same under `/mnt/c/` ``` cd /mnt/c/ symfony new symfony_test cd symfony_test php bin/console server:run ``` # Additional information I've added my dev folders as excluded folders in Windows Defender, as well as %LOCALAPPDATA%\lxss. I've tried having my project in `~` and pointing my IDE to %LOCALAPPDATA%\lxss\home\mikael\ but as I've later read, there is no supported way of editing WSL files. WSL is installed in its default location under C (no strange junction or symlink), which is a healthy SSD. My computer is attached to a domain, if this might have any influence.